Research shows that a strong sense of self-esteem is the best predictor of future success in a child. Montessori programs, based on self-directed, non-competitive activities, help foster the positive self-image children need to face challenges with optimism and confidence.

The Montessori method is undeniably successful and has been helping children excel for over a century. The academic foundation, problem solving skills and positive emotional outlook the method instills stay with students through secondary schooling, college and beyond. 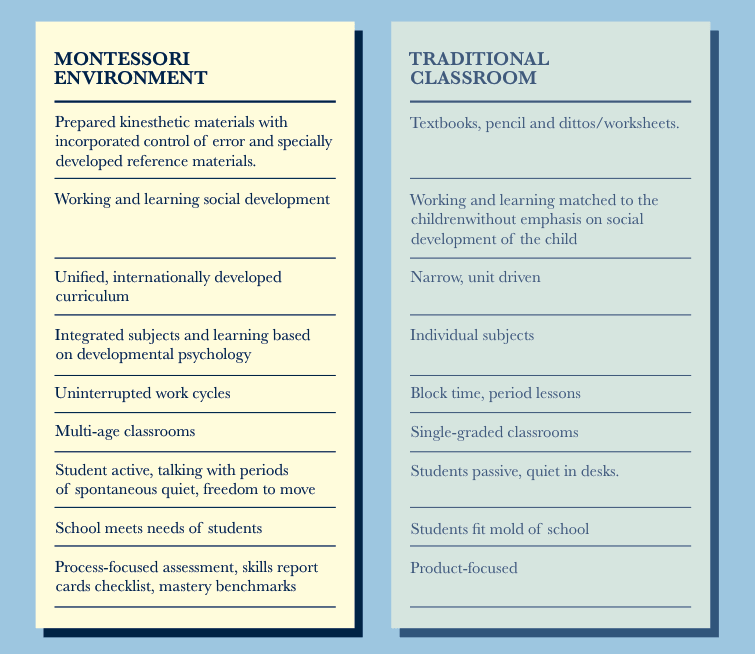 — In 2006, Dr. Angeline Lillard, Professor of Psychology at the University of Virginia, and her colleagues conducted a study of Montessori and non- Montessori students in two age groups: five-year-olds and twelve-year-olds. The kindergarten-aged Montessori children tested higher in both math and reading than the public school children, using the Woodcock-Johnson Test Battery. The Montessori students also displayed more advanced social cognition and executive control, and demonstrated a greater concern over concepts of fairness and justice. The older group of Montessori children evinced a stronger feeling of community in their school than their public school counterparts and tested higher in math and writing skills.

— A study conducted in 1991 reached a similar conclusion. In general, Montessori students were more proficient at language arts and mathematics and expressed more positive attitudes towards their schools. This study concluded that Montessori students were more likely than public school students to complete their education rather than drop out [Alcillia Clifford and Carol Takacs, 1991].

— Maria Montessori believed the first six years of life form the foundation for the rest of our lives, and her teaching methods were built around this premise. Although these years were always thought to be vital to human development, recent advances in brain research and technology prove Maria right! These years are tremendously critical in terms of brain development.

— Recent research also reveals that genetics alone do not determine human development. While nature provides a complex system of brain circuitry, it is external forces such as diet, surroundings, and the stimulating and problem-solving activities that children are engaged in that determine how the circuits are wired. Brain circuitry affects all aspects of a child’s development, including moral and social development.

— An enriched environment, according to scientists Diamond and Hopson, is one that includes a steady source of environmental support, a nutritious diet, stimulates all senses, provides an atmosphere free from stress, is enjoyable, challenging, allows social interaction, promotes development, gives the child a chance to assess the results of their actions, and allows the child to be an active participant rather than a passive observer. This is the Montessori Method!